The ongoing global Covid-19 pandemic places a magnifying glass on many issues of local and global fairness and justice that have been ignored and under-emphasised. The world-wide outbreak, the public health measures to contain it, and the resulting socioeconomic disruption call for greater attention to be paid to the inequities and injustices that have been hiding in plain sight. The problems of under-emphasis and apparent lack of knowledge about who is really suffering maps directly onto trajectories traced in critical development studies.

From its very beginnings, critical development studies has been concerned with the question of what is the right referent object – ‘the economy’ or ‘the people’ and how to deal with the differential exclusions and inclusions in whatever definition is used to signify ‘the people’. The choice of referents now hangs heavily over governments. Governments that have been too slow to impose lockdowns or too hasty in relaxing restrictions are open to accusations of callousness and playing roulette with the public’s lives. There is a questioning of utilitarian morality in relation to whether restrictions should relaxed, and whether the tradeoff between economic recovery and disease exposure amounts to something amounting to social eugenics. Questions of fairness and justice are arising from every corner. 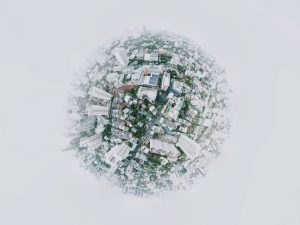 Questions about the limits of economic rationality and inhumanity sparked the rise of development ethics and the human development paradigm. Various ‘front lines’ demarcate those who are most exposed, whose lives are at risk from those sheltering-in-place in reasonable comfort. The question of who is most affected reflects attention back to the socially, economically and politically marginalized, discriminated and already disadvantaged. It lays bare the fates of people already segregated and institutionalized behind doors such as in care homes, living with disabilities, prisoners and subject to asylum, refugee and border controls. And those with no doors: in informal settlements and slums, migrant workers and homeless people. All have fared worse in being protected, counted, diagnosed, and treated, in becoming ill and dying – pointing to a necropolitical order that counts on counting certain types of persons, their labour and ultimately their lives as lesser, as needing less protection and deserving of less consideration, respect and recompense.

The failure to properly account for entire categories or classes of persons in aggregates and generalizations is at the centre of all the main debates that matter in critical development studies. All our ways of thinking use labels that seem to be ignorant in some way. These labels are not just accidentally ignorant, they actually seem to produce ignorance.

A social constructionist approach to knowledge highlights that all knowledge is power and that the power to un-know is as important as the power to know. Agnotology considers ignorance to be something more than simply an absence of knowledge, some kind of a ‘natural’ vacuum. General and systemic ignorance are socially, politically and culturally produced. Lack of knowledge is a social construct that emerges through selective choice and cultivation, or through neglect and intentional, active attempts to deceive. The term ‘agnotology’ is explored in Robert Proctor’s studies of deliberate, organized production of non-knowledge and ‘fake’ knowledge about the health harms caused by the tobacco, asbestos, and pharmaceuticals industries. The history and ethics of pandemic policies requires us to pay attention to what we might learn from the sociology of absences and ignorances. Proctor emphasises the problematic impact of commercialization on scientific research. Dragged by this current, scientific research has struggled against the interest in actively furthering epistemic inadequacy and epistemic injustice.

Other critiques, counter-currents and twists challenge conventional disciplinary and expert knowledge. We have come to the pandemic in a state of complex and broad-based epistemic crisis which places the global social organization of science in question. Amidst such crisis, pandemic denialism and dizzyingly incoherent leadership surfaces, while earlier lessons about social justice in pandemic preparedness have simply been ignored. South Africa battled with AIDS denialism in the late 1990s and early 2000s, yet few parallels have been drawn to learn from that experience, nor have sufficient efforts been made to learn from Asia and Africa’s experience with Ebola and MERS. Brazil’s leader, Jair Bolsonaro’s claim that the virus was just a media fantasy and Boris Johnson’s boasting about handshaking on the same day that public health advice on avoiding physical contact was issued, together with his announcement that many families would lose loved ones are ethically, politically and humanly unconscionable. The health professions seem baffled by governmental reluctance to take heed of advice from China to act fast to contain the virus . To shift the blame onto China, or to resort to claiming to have the ‘best science’ seems to be substituting Sinophobia and imperial nostalgia for action based on actual global experience. The widespread under-testing and under-counting of infections and fatalities continues to stand as a deadly exemplification of pandemic agnotology.

The ideology, policies and effects that cluster around ‘neoliberalism’ include authoritarian-populist government, narrowing of knowledge domains and sceptism towards expert and professional knowledge. All these seem somehow connected. Donald Trump and other right-wing leaders’ rejection of expertise merely continues the agnotological trajectories cultivated by neoliberal regimes and think-tanks that have been concertedly engineering the public out of common sense arguably as far back as the beginning of the end of empire in the 1920s. Public interest, public science and public education have been portrayed as corrupt, lazy, irrelevant, failing and wasteful of taxpayers’ money, while private, for-profit companies with political connections have been lauded as heroic, effective, efficient and entrepreneurial replacements for public services. The very concepts of the social and the public were disowned by neoliberal ideologues, who sought to make it un-known. In the social sciences, public and welfare economics, comparative and institutional studies that learn by comparing different experiences and exploring different political and social choices were marginalized under the epithet of ‘heterodoxy’. These were displaced by an orthodoxy of abstract models and the new behavioural approaches combining and conflating methodological individualism and methodological nationalism, with consequent depoliticizing and politicizing effects. Welfare and social democratic models of society were replaced by anti-collectivist, anti-welfarist, anti-redistributionist (and oxymoronic) disciplines of (morally blind) ‘Social Choice’ and (not just bad faith, but anti-democratic) ‘Public Choice’. Science and engineering funding narrowed, streamlining research and education towards business-favouring and military-connected ‘relevance’. The purpose of education was redefined to make individuals fit for job markets and countries fit for competition in the hunger games of competitive globalization.

Back to that old development chestnut

The definitional question has always sat at the very heart of the development imaginary and therefore its theories, policies and practices. The collapse of the Cold War terminology of ‘First’, ‘Second’ and ‘Third’ Worlds has never been complete and the replacement with the geographically improbable ‘North versus South’ with the ‘global’ prefix has not ameliorated dissatisfactions with these terms. The labels refuse to go away completely and as long as we have this field of ‘development’, we continue to use them. What the unsatisfactory labels of development studies represents is a paradoxically simultaneous will to know and to not-know, to see and unsee inequalities. While much of the ‘decolonization’ critique in development studies focuses on epistemic dominance and the will to impose dominating forms of knowledge, this post has tried to think more about how the will to dominate leans on the will to ignore.

The dissatisfaction with labels starts by implicitly rejecting a ranking or stage progression theory of development: First, Second, Third, where the First World must be ‘earlier’, ‘more’ or ‘better’ developed. Anywhere that was not ‘First’ must be ‘later’, ‘less’ or ‘worse’ developed. This progression theory implies that the advantage in knowledge and experience lies with the first ‘world’ and that it has already ‘arrived’.

However, the Second World didn’t exactly come second in this sense. ‘Second’ was simply used to mark the ‘world’ that had a different political hegemon, the former USSR – but only as a kind of straw man, to shift suspicion and blame onto while avoiding questions about the ‘First World’. The Second ‘world’ was constructed as a separate, un-knowable Other of the First ‘world’ represented by the capitalist USA and Western Europe. While the Truman doctrine argued that the First World was synonymous with ‘freedom’ and ipso facto better than the Second World which was synonymous with ‘tyranny’, it was clear that these were absurd generalizations, given the constitutive role of settler colonialism, patriarchy and denial of civil, political, social, economic and cultural rights in the so-called ‘free’ world. If its own logic prevails, then shouldn’t the First Nations of the Americas, the indigenous people be considered the ‘first’, ‘better’ and ‘more developed’, since they were there first? When the wall symbolically separating the two ‘worlds’ came down, a decade of rapid ‘globalization’ followed and tentative attempts to construct a new federalism began, starting with Germany and a re-universalization of human rights. New concepts of the separate and unknown appeared in the discourses of ‘BRICs’, ‘China’ and ‘Africa’. The ultimate and infinite class of un-known appeared in the form of a non-territorial war, the War on Terror.

The ‘Third World’ is a portal

To be ‘Third’ in the Third World was never a question of ordinal ranking, but a claim on history. ‘Catching up’ was not a question of steps to be followed, but accounting for power and resources taken, demanding reparations for past misappropriations and demanding that structures become different and possibility of rights without injustice secured in the future. Alfred Sauvy, who coined the term ‘tiers monde’ likened it to the demands of the ‘Third estate’ in the 1789 French Revolution. The mass of population coming into being as a political force and demanding to be reckoned-with as such. Being ‘Third’ in a non-ordinal sense was about an opening space of political self-determination, as well as a rejection of hegemony as domination by the First or Second world (while that lasted). Beyond decolonial nationalism, the moment of political self-determination begs the question of what might come next – questions of how to survive, modify or replace capitalism that already had taproots in five hundred years of imperialism, colonization and Eurocentrism. How might be political, economic, social and cultural expectations be articulated and fulfilled? These were the real stakes defining the subject matter of development and they arose in the context of negotiating a new world order where historical inequalities now demanded to be accounted for.

Arundhati Roy suggested that ‘the pandemic is a portal’, but its appalling vital inequalities are simply the newest crisis incarnation of that opened by the ‘Third World’. A thread of history connects the Third Estate of revolutionary Europe, struggles against imperialism and colonialism in the colonies, the demands at the UN for a New International Economic Order, and the struggle to realize the Right to Development. The questions of justice and fairness and how they relate the agnotology of what is un-asked and un-known about ‘Africa’ and ‘China’, what the relationship might be between capitalism and socialism and ever more pointed questions about how to treat ‘the Third World within the First’ are forms of uncomfortable and painful trouble, but also good trouble for the world order today.

Su-ming Khoo is lecturer in the School of Political Science and Sociology at NUI Galway. She is interested in development, human rights and higher education.

Picture by Joshua Rawson-Harris on Unsplash