This is the introductory note of the conference on ‘Decolonial Alternatives to Development’ that is organised at University of Kassel, Germany, 10 – 11 September. Members of the Convivial Thinking Collective are attending the conference and will report.

Since the 1990s, the Post‐Development critique has sparked debate in development theory and policy. It rejected the entire paradigm of ‘development’ – that there are ‘developed’ and ‘less developed’ countries, thus a universal scale, and that the former can be found in the industrialised West.

It furthermore criticised the paradigm’s colonial continuities – a Eurocentric perception of difference as backwardness, legitimising interventions by claiming to ‘develop the underdeveloped’ instead of ‘civilising the uncivilised’, and allowing for the preservation of a colonial division of labour. In the light of these fundamental points of disagreement, Post‐Development perspectives declared ‘development’ as beyond reform. Instead of alternative development, they argued, it was necessary to look for alternatives to development. These were to be found in concepts and practices beyond those Western models (to be more precise: those that were hegemonic in the West) which were to be universalized through ‘development’. Concepts and practices arising out of disillusionment with the false promises of ‘development’, inspired by non‐Western cultural traditions were presented as potentially bringing forth a Post‐Development era. 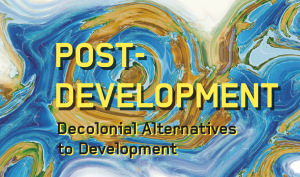 A quarter of a century later, the idea of ‘development’ still seems as popular as ever, and the hegemony of the models of capitalism, nation state and Western science does not appear to waver. And the processes of economic growth, industrialization and poverty reduction in China and a few other states bear witness to the fact that the promise of ‘development’ was not entirely false – albeit only in some countries, in an autocratic context and with considerable ecological costs, neglecting any alternative ideas of a good society. How can a Post‐Development perspective make sense of the markedly changed global order in the 21st century? Does it have to acknowledge that people’s desires for equity are bound to a Western way of life and look for more pragmatic alternatives or would this mean ignoring the manipulative power of discourses of ‘development’? If Post‐Development does not want to prescribe how people should live and cherishes the pluriverse of different ideas of a good society, how does it deal with the predicament of ecological destruction and climate change? What is more important: sustainability or self‐determination? Or is this a false dichotomy, superseded by conceptions or practices that transcend it?

But is the hegemony really unwavering? The popularity of Buen Vivir/Sumak Kawsay/Suma Qamaña in Latin America, Swaraj in India and Ubuntu in South Africa clearly manifests a desire to transcend the cosmovision of homo oeconomicus, Cartesian rationality and a Baconian, anthropocentric view of
nature, in favour of alternatives which see humans as spiritual beings, as embedded in social relations, or as part of nature. Likewise, more and more people marginalised by or fed up with capitalist modernity engage in alternative economic practices inspired by the ideas of commons, reciprocity and solidarity – in the global South and North. Can these be understood as pathways to a Post‐Development future or as insufficient steps because they do not confront global capitalism head‐on? And what about those few alternatives which do break with the system: can self‐organised, democratic alternatives like those in Chiapas or Rojava survive or even grow? Or will they have to compromise their ideals or perish?

There is no doubt that the Post‐Development critique has become well‐known, perhaps even influential by now – but what happens if the critique reaches the institutions of the development apparatus? Are the institutions being reformed or is the critique being co‐opted? Can the structures of development agencies be used for emancipatory purposes, as Enda Graf Sahel is trying to? Or is the World Bank, if it is funding projects with traditional authorities and focused on indigenous knowledge, already depoliticising and incorporating the Post‐Development critique? Are there models of global financial redistribution and cooperation which do not reproduce hierarchies?

Curious for the answers to these questions? Stay tuned in this space and follow us on twitter for some live tweeting.